In the hunt for their 25th national championship, PSV will have a brand new team coach to transport the Eindhoveners to their matches starting with the 2019/2020 season. The deluxe 13.9-metre long Futura was presented to Kupers Touringcars today and at the same time officially presented to PSV's supporters, players and staff. 30 supporters, the lucky winners of a special PSV contest, picked up the vehicle at VDL Bus & Coach in Valkenswaard. The team coach was officially presented to players and staff at the Herdgang, PSV's training complex.

Willem van der Leegte, President and CEO of VDL Groep, spoke at the event: “The fact that we are delivering this coach is a fantastic example of the cooperation with Kupers Touringcars and PSV. This demonstrates perfectly how we work together in the Brainport region. We and all the VDL employees in Valkenswaard who worked hard on this fantastic coach wish the players and staff of PSV many comfortable, safe kilometres and, of course, a successful football season.” 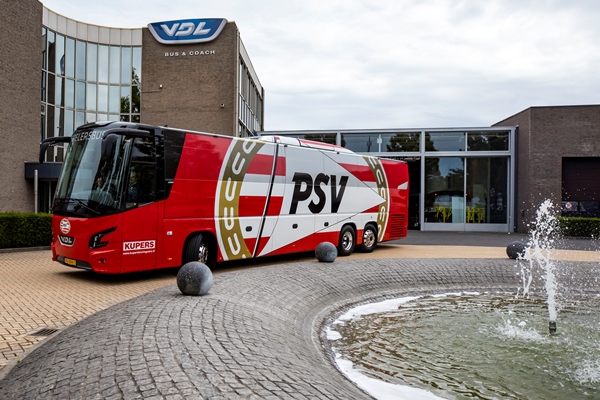 Complete with every convenience
The new PSV team coach is a deluxe VDL Futura coach, finished for maximum comfort, with numerous modern technologies, and features red as the most dominant colour in both the interior and exterior. The motto ‘Unity makes strength’ is printed in Dutch on the back of the 3-axle coach, with a picture of the red and white shirt emblazoned with sponsor name ‘Metropool Brainport Eindhoven’ below it.

The vehicle has 36 red and white leather seats, with USB connections close at hand. A deluxe kitchen at the back of the coach spans the full width and includes two refrigerators, a microwave, oven, coffee maker and a worktop with mixer tap and sink. There is on-board Wi-Fi, along with a toilet and six LCD screens. There are also 6 VIP tables with LED spots, each of which sits 4 people.

The PSV team coach is owned by Kupers Touringcars, official supplier of PSV for many years now. Kupers provides the bus transport for the first string, PSV U21, the PSV women, the youth teams and the club's supporters' association.

Together with ASML, Philips, High Tech Campus Eindhoven and Jumbo Supermarkets, VDL Groep has initiated an innovative, pioneering collaboration with PSV. The 5 companies have joined PSV as premium partners under the name ‘Metropoolregio Brainport Eindhoven’ (Metropolitan Region Brainport Eindhoven). They will collaborate at the cutting edge of innovation, vitality, entertainment, talent development and recruitment. The parties' ambition is to work together to put the region even more prominently on the map as a world leader in knowledge, high-tech and innovation. 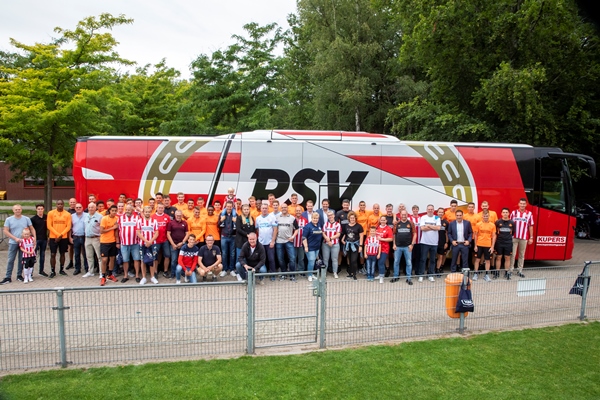 Kupers Touringcars
Kupers was founded in 1931, at which time the company provided workers with transport to and from the various factories in Limburg and North Brabant. In 1945, after the war, the company was restarted. Later, throughout the sixties and seventies Kupers shifted its focus to day trips and overnight coach holidays throughout Europe. The collaboration with De Jong Intra Vakanties dates back to 1978, and since 2013 Kupers has held a 50% stake in the company. Kupers also provides coach service for its own label, Van der Biesen Travel, and works closely with many other parties, including Arriva Personenvervoer, for which Kupers provides scheduled service on various lines for longer periods.

In recent years, Kupers has made a number of acquisitions, both to achieve economies of scale through geographical expansion and diversity within the work package through a focus on the local market. Kupers took over Litax Reizen of Reuver/Roermond in 2015, de Kruyff Touringcars of Eindhoven in 2017 and BBA Tours of Tilburg in 2018. This brought the vehicle fleet to more than 82 units and the workforce to more than 230 employees in 2018. In recent years the turnover has grown from around 5 million euros in 2014 to 15 million euros in 2018. Kupers places great importance to supplying top quality and therefore invests between 3 and 5 million euros a year in new buses and coaches. 65 buses out of a total of over 80 are equipped with state-of-the-art Euro 6 engines, which is unique in the industry. Kupers and VDL go back a long way and have a close partnership. Since the relationship between the two companies began, Kupers has purchased over 350 units from VDL Groep.